The hydrogen electric race car will attempt to break the record for fuel cell powered vehicles on the famous Nürburgring Nordschleife. In the past, multiple types of engines have been used to power vehicles. In the beginning of motoring history, also electric cars were available. At this moment, multiple resources are used to power a vehicle; petrol, diesel, bio-fuels, natural gas, electricity and hydrogen. The developments in recent decades made us realize how important a sustainable solution for mobility is. Fossil fuels are getting scarce, expensive and are polluting. New, more sustainable systems have been developed over the years, under which the hydrogen fuel cell car. Forze is considering hydrogen as one of the future solutions to power vehicles and other applications, even at home. Car manufacturers like Hyundai, Mercedes and Honda are developing fuel cell cars and are aiming to sell these cars to the public from 2015. Many European countries are investing into a hydrogen filling station network to accommodate these cars. Germany is a perfect example; this country aims for 50 hydrogen fuel station in 2015. At this moment, hydrogen fuel cell race cars are rare. Forze and Green GT are the only two parties which develop high power fuel cell race cars at this moment. Forze is the only student team working with high power automotive fuel cells worldwide. 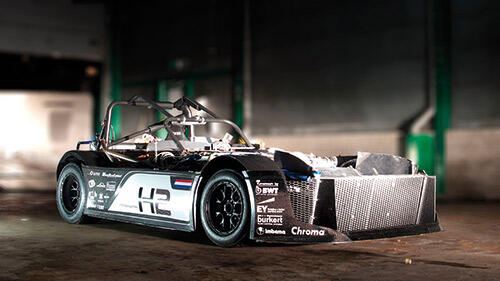 Hydrogen Electric
Hydrogen can be used to power an electric car, just like a battery. There is hardly a difference between a battery powered car and a hydrogen car, both cars have electric motors that power the drivetrain. The only big difference is the energy resource: A battery car stores the electric energy in a battery while a hydrogen vehicle stores energy in hydrogen. This hydrogen is converted in a fuel cell system to electric energy and can be filled within minutes, similar as petrol at a filling station. This means that a hydrogen fuel cell car is perfectly suitable for travelling long distance without having to recharge. 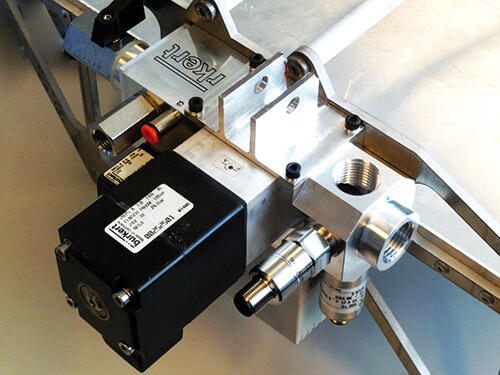 The hydrogen system in these race cars is developed by Forze. The heart of this system is a Ballard stack, in which the hydrogen reacts with oxygen from the air. During this reaction, electricity and water is produced. The electricity is used to power the electric engines; the water is used to cool the brakes. Controlling and operating a fuel cell stack is a delicate process. Many sensors, pumps and other components are part of the balance of plant, which is needed to operate a fuel cell. Electronics and software are used to control this whole process in an efficient and effective way. The system developed by Forze is lightweight and therefore suitable for automotive purposes, especially sports or race cars. The efficiency of this system is 50 % which means the system needs to be cooled with a heat exchanger. In road cars, excessive heat can be used to heat the interior if necessary.

Long term relationship
The team has a rich heritage in fuel cell powered race cars. Since 2007, five cars have been developed: ground breaking and successful, both technology- and performance-wise. The first support from Bürkert was only components. A proportional solenoid valve, a pressure sensor and a controller was installed in the Forze IV and function wise it worked well. But soon Forze was inspired by Bürkert to bring the solution to another level. Johann Gunnesch, engineer at the Systemhaus of Bürkert Fluid Control Systems in Ingelfingen, develops such individual, highly specific system solutions for a wide range of applications requested by Bürkert customers throughout the world. The student team presented its flow plan for the fuel cell to Bürkert and explained the basic technical requirements. The goal was to find an overall solution for the hydrogen supply, which had to be as compact and lightweight as possible while making use of standard components from the Bürkert product portfolio. In the Bürkert-Systemhaus Gunnesch and his team developed a proposal for an integrated solution. A compact aluminium block, which saved considerably on material, provided room for a safety valve, a solenoid control valve for controlling the hydrogen pressure, a mass flow meter, an overflow valve, as well as temperature and pressure sensors.

New technology exceed limits
Johann Gunnesch explains the function of the so-called low pressure block: “Coming from the tank, the hydrogen first passes a shut-off valve. An integrated pressure relief valve has to release the hydrogen in the event of a malfunction.  A Type 2875 solenoid control valve meters the hydrogen for the fuel cell by controlling the required pressure in the fuel cell. A Type 8701 flow meter measures the supplied quantity of hydrogen and sends this data to the vehicle’s electronic control system. The pressure and temperature are likewise monitored constantly by sensors that send their readings to the controller to enable the fuel cell to operate under optimal conditions at all times. Furthermore, there is a Type 6011bleed valve, which can evacuate the entire system in case the vehicle is not driven.” 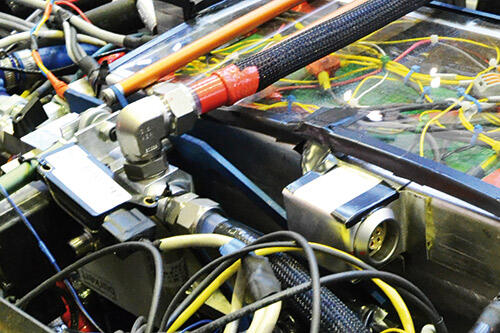 This car was the first hydrogen fuel cell powered race car ever to compete in an official racing event. With all the information and knowledge from the Forze IV, a new design was made with 50 % more power but with no extra weight: Forze V. With 18 kW Fuel Cell Power and 60 kW Boost Power the 315 kg car speeds in less than 5 seconds from 0 - 100 km/h and with a top speed of 120 km/h.

A new year, a new challenge
Already used to the ambitions of the Forze teams, with the Forze VI a new era for the automotive racing world has started. With a car based on a Lotus 7 Type frame the chief engineer has the challenge to implement a 100 kW Fuel Cell and 190 kW Boost Power. The car also needs two 74 litre hydrogen tanks at 350 bar to feed the stacks together with MassFlow meter up to 5,000 l/min air to provide enough oxygen. This was a challenge for Bürkert as well. “We integrated a new developed laminar flow element design to achieve the Forze VI requirements and with that still light weight and compact but at least 4 times as much capacity Johann Gunnesch says.” Bürkert has designed the compact lightweight solution for Forze VI to achieve the Fuel Cell to power the 880 kg car from 0 - 100 km/h in less than 4 seconds and reach over 210 km/h. The only “emission” left behind in the environment is water.

Do you have any questions? Don´t hesitate to contact us.